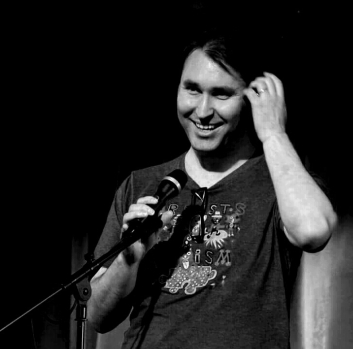 Frank Louis Allen’s rapid, intricate, dream-like marker drawings invoke a thoughtful pause from viewers. Allen’s compositions contain a series of unplanned, jagged and smooth lines that flow organically across various mediums. His work often transforms everyday objects into complex recognizable forms, while other times his work flows into purely abstract forms. “It’s not about focusing– it’s about not focusing,” he says about his process.

Allen’s first experience with drawing started in November 2011 at age 31 after a back injury which left him partially disabled. Shortly after, Frank began exhibiting his work on a Facebook Page called “Artists and Autism“. This online community, which aims to promote autism acceptance through the arts, allowed him to connect to other autistic artists and host weekly video casts of his live drawing. The page also introduced him to the founder of the community, Kara Stewart Allen. In 2013, he moved to Fort Wayne to marry and move to Indiana where she resides.

The spontaneous nature of Allen’s work is further influenced by his environment: who he’s talking to, what music he’s listening to, or what he’s watching on the television. What makes Allen’s work so remarkable is how it has helped him communicate as an individual with both A-Typical Autism (PDD-NOS) and Retinitis Pigmentosa; the latter which will result in eventual blindness. Allen’s unique perspective and introspective illustrations lend a glimpse into the depths of neuroaesthetics productivity.

Allen’s art permeates the boundaries of art and life. His work, while deeply personal, expresses a universality which transcends the limits of our personal afflictions. He shares his vision with the public on walls, skateboards, guitars, and other objects common in his daily life.

One thought on “About”